The calculation tells us where price is in its recent range.

Most traders and markets use a period of 14 although 9 period and 20 period values are used to make the values more or less sensitive, respectively.

ChartIQ defaults to a period of 14.

You can also select color for the plot (and the two zones by selecting the boxes next to each to bring up a color palette.

%R is the measurement of the placement of a current price within a recent trading range.   The theory is that as prices rise, daily (or hourly, minute, etc.) closes tend to occur closer to the high end of their recent range. When prices trend higher or are flat and daily closes begin to sag within the range, it signals internal market weakness.

Williams %R creates the same plot as fast stochastics and only the scale is different. However, because it is not smoothed the plot will tend to show many crossovers and therefore could show false signals to the inexperienced user of this technique.

Values above -20 or below -80 are potential market signals. Divergences between %R and the price trend, both within the overbought and oversold ranges, provide evidence of pending reversals in the market. 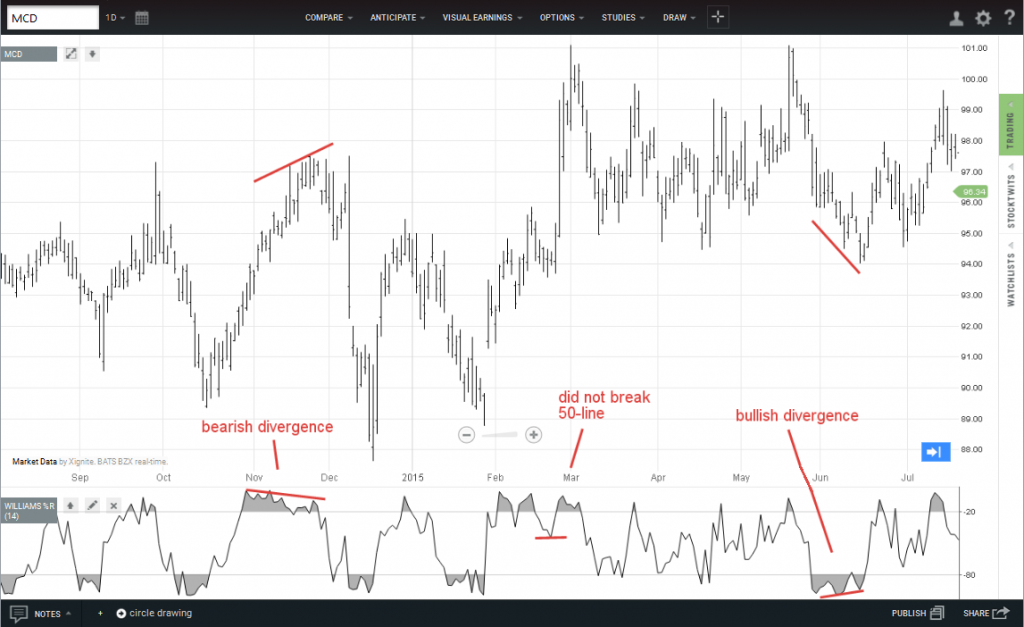 McDonalds rallied in late 2014 but 14-day %R started to fade, forming a bearish divergence. It was a good sign for traders to take profits ahead of the fall.

In February 2015, %R dropped to the -50-level but not below to suggest that the price decline was just a correction and the dip could be bought.

Finally, in June, a bullish divergence appeared as %R made a higher low even as prices fell.

Calculates where price is within a recent range.

Lowest Low = lowest low for the past N-periods including current

Highest High = highest high for the past N-periods including current