All cash and futures, not options.

All market types in daily and weekly time frames, although it can be used intraday, as well. However, trending markets are best.

Calculate the Average True Range and then multiply by the multiplier. For an up trend, subtract from previous close. For a down trend, add to previous close. 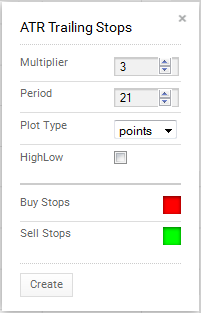 ATR typically uses between a 5- and 21-period span. Originator Welles Wilder suggested using 7. Multiples vary between 2.5 and 3.5 ATR and Wilder suggested 3. ChartIQ defaults to a 21-period average of the True Range and 3-period multiple for the stop.

You can also select the color for Average True Range line by selecting the box to bring up a color palette.

The format for the stop can be set by setting the plot type to points or square wave.

All stops attempt to limit risk by placing orders to exit a trade if price moves in the wrong way. Some traders simply use a percentage; others use technical levels such as support, resistance and trendlines. Still others use complicated formulas using indicators and price action together (if indicator crosses X then exit).

ATR Trailing Stops are based on average true range, which itself attempts to consider period to period changes as well as the range for the current period. By doing so, it incorporates volatility into the mix so that stops for more volatile stocks are wider and stops for more sedate stocks are narrower.

The Average True Range Trailing Stop is similar to other trailing stop methods. As long as price action remains above the stop in up trends and below it for down trends, the position is held. As soon as price crosses the stop, the position is exited. Taser shows a nice rising trend on the left side of the chart and a stop out when price jumped down at the end of February 2015. The ensuing decline was short-lived and the stop for short sellers was triggered quickly for only a minimal gain.

The next up-phase began but stalled in May. The trade was kept because the stop was not triggered, thanks to the average true range staying wide. As we can see, capital was tied up during the flat phase even though there were no actual losses.

This demonstrates that trending markets are better for this method.

TR=True Range = defined as the greatest of the following:

ATR Trailing Stop in a rising trend is highest price over the user-defined span minus (multiplier * ATR). If prices continue to rise, the stop will continue to rise. However, if prices flatten out or pull back the stop will be flat. Only when price dips below the flat stop line will it flip to the inverse with the stop above prices.