Parabolic SAR (Stop-and-Reverse) is used to set stop prices and automatically trail them with the trend. 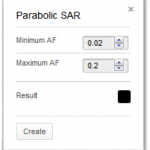 You can also select color for the parabolic plot by selecting the result box to bring up a color palette.

The Parabolic Time/Price System is a trading system that calculates stop and reverse values as a function of price and time. When a position is initiated, the stop is set at a price above or below current action based on previous price swings. The stop is then moved in the direction of price activity based on an accelerator formula. This allows a new trend to become established without stopping out correct positions due to the normal volatility associated with changes in trend.

Parabolics employ trailing stops that are initially set loosely and then tightened exponentially. This exponential smoothing factor causes the stop points to take on a parabolic shape as they get closer to the price action. Having a maximum acceleration factor ensures that the SAR is not so tight that normal market wiggles (volatility) cause false signals.

The stronger the trend, the better parabolic SAR works. It is often employed trend quantifying tools such as moving average systems or the Welles Wilder Average Directional Index. Chipotle Mexican Grill moved sideways in May and June 2103 and the stop-and-reverse was triggered resulting in many whipsaws. The same occurred several months later even though the trend was mostly rising. However, it was not very strong.

The stock started to rally a bit more steadily in October and did not trigger the SAR. It then exploded higher, keeping the long position intact. Finally it stalled in November, triggered the stop and locked in good profits before the stock moved sideways to lower over the next month.

The initial SAR (stop and reverse point) is set at the extreme price of the previous trend. After the initial SAR is set, the next intervalâ€™s SAR is adjusted in the direction of the trend by the distance between the high for the new trend and the previous SAR then multiplied by an acceleration factor. The acceleration factor typically starts at .02 and increases by .02 to a typical maximum of .20 each period the market makes a new high/low for the move.

For a rising trend:

When price moves through the SAR point, the entire calculation starts over but the extreme point becomes the lowest low of the new trend and the AF becomes a negative number.